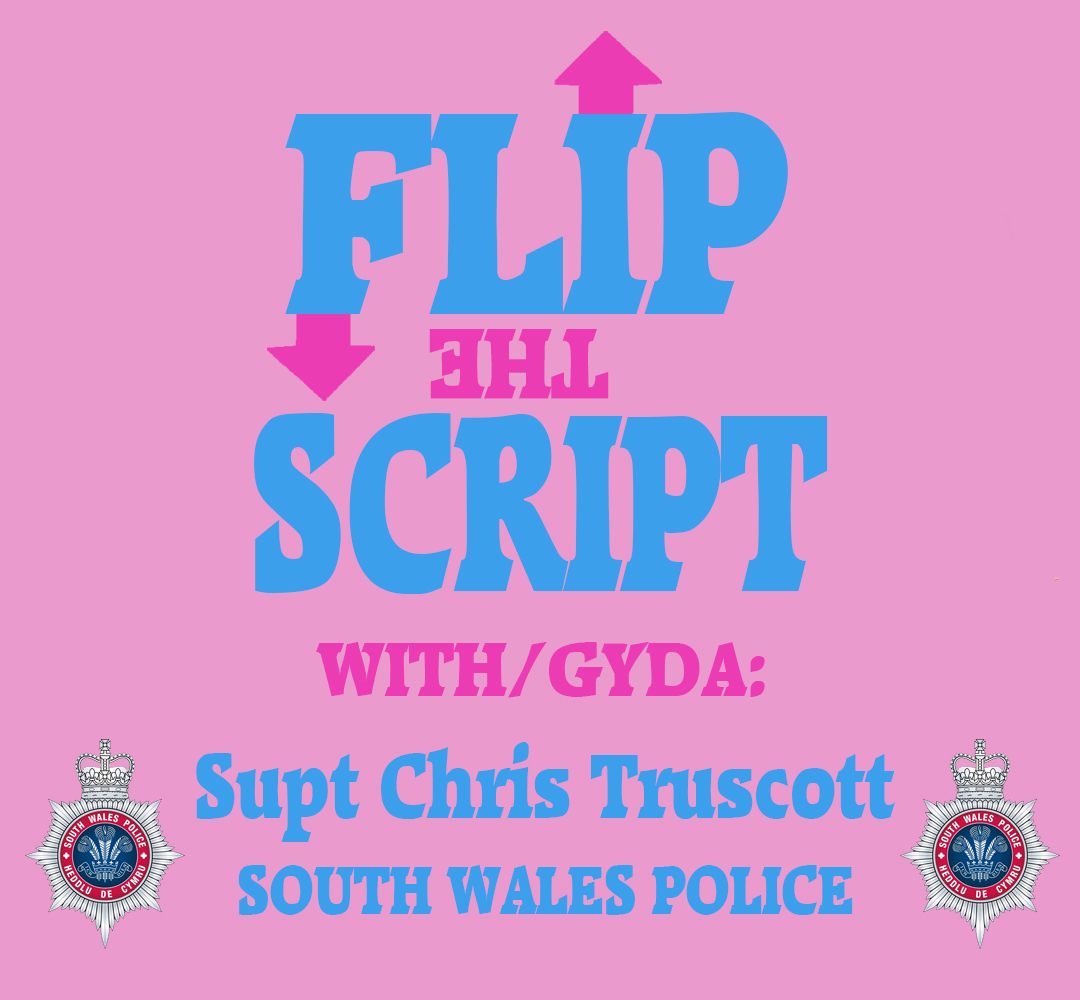 What is Flip The Script Friday?

Flip The Script Friday is a weekly event where we invite organisations/adults onto our website/social media to answer the questions that young people have for them.

Why is it a thing?

This is an opportunity for young people’s voices to be heard and to have their questions answered. But equally, it’s a chance to destigmatise the discussion of mental health, highlight the great work that organisations are doing and to make reaching out for support from them less intimidating.

We collaborated with Chris Truscott, he is a senior police officer in South Wales Police.  Up until recently he was leading a programme of work on Adverse Childhood Experiences (ACEs) and how they impact on individuals, for example, mental health, alcohol/drug abuse, incarceration and domestic abuse.

This programme sought to influence the way that the police deal with vulnerable people and to understand that there are many drivers for how people behave and react, he says “we need to look beyond what we are faced with.  Over 6000 officers, staff and partner agencies received training in adverse childhood experiences and how trauma impacts upon not just children but also adults.”

Although more recently he started a new role as the head of Public Service Centre in Bridgend – this is where his team takes calls from the public and despatch police officers to incidents 24/7 every day of the year.

Who are the South Wales Police?

South Wales is a diverse region, boasting urban, rural and coastal areas and featuring the two largest cities in Wales – Swansea and the capital city, Cardiff. The force also serves 63 of the 100 most deprived communities in Wales.

The force has almost 3000 police officers and over 2200 police staff, including Police Community Support Officers (PCSOs) and a team of dedicated volunteers that includes over 100 Special Constables and around 150 Police Youth Volunteers.”

We had so many questions sent in by young people to our Instagram @platfform4yp and here are some of the highlights!

What do you think of Flip The Script?

It’s a fantastic opportunity to make sure the voices of young people are heard and that there is an opportunity to ask people like me questions and importantly get answers.

What made you want to work with the police?

I decided at a young age I either wanted to be a police officer or a physiotherapist.  The police officer choice came from watching episodes of ‘The Bill’ on tv (Google that as I’m probably showing my age!).  I realised when I started studying Human Biology that physiotherapy wasn’t for me so I joined the police at 18 as a Special Constable (Volunteer) then full-time at 19.  The police was in no way the same as The Bill however what attracted me was the variety of work, and of course helping people to make a positive difference.

What is your favourite genre of music?

That’s a tough one as I like anything other than heavy metal and Jazz – I’m more BBC Radio 2 than Radio 1 though!

If you could send the public one message about misconceptions that exist around policing what would it be?

We are human, have families and our own everyday problems just like everyone else, we nearly always get it right in difficult and unpredictable situations but sometimes we do make mistakes which we need to learn from – just like everyone else.  My colleagues save lives every day, most of which you never hear about.

Policing is about much more than blue lights and pub fights.  We see people at their best and their worst.  We have seen and heard things that most people will never have to, but we have no superpowers, we are sons and daughters, just like you.

What motivates you to get out of bed in the morning and do the job you do?

I love what I do so why would I want to stay in bed all day??

What is one piece of advice you were given that you will never forget?

Never give up on people

What was your favourite subject in school? Why?

Probably Maths – just because it challenged my brain although I’ve never used algebra in policing!

What kind of training do police go through in regards to dealing with young people in mental health-related crisis?

Mental health has become such a big area of policing, over 80% of our demand relates to public safety and welfare type incidents.  All our frontline staff have received training in dealing with people in crisis as well as recognising trauma and the impact it has on people and their behaviour.  Our police control room has mental health professionals working there to help officers and staff out on the street by giving help advice to both them and people in crisis.  We also signpost people to organisations such as ‘Shout’ who can provide help and support.

Do all laws that apply to British Citizens apply to police?

In nearly all cases yes.  An example of an exemption for on-duty police officers is exceeding the speed limit when driving to emergency incidents such as road traffic collisions where people are injured or domestic violence incidents.  In every case though we need to be able to justify why we have worked outside of legislation and rightly face scrutiny.

How do you look after yourself and your mental health/wellbeing when working?

I spend most of my day in meetings but make a conscious effort to try and stop for lunch and set my Fitbit to remind me when I’ve been sat still for too long to make sure I get up and walk somewhere.

How do you look after yourself and your mental health/wellbeing when at home?

I get up at 5.30am during the week and go for a walk before work to make sure I do 10000 steps a day.  I try to make my days off my own but with access to my work via a laptop I am often tempted  – my partner keeps me in check though!

What is one thing you would tell your younger self now?