By Victoria Hislop. The Return is about the Spanish Civil war and the effect that it had on the country and its citizens. 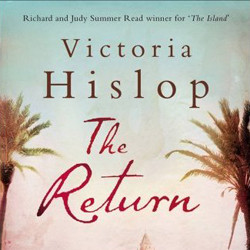 The Return is about the Spanish Civil war and the effect that it had on the country and its citizens. For me, the read was emotional and interesting as it’s about a historical event that affected innocent people.

Even though I’ve heard of the Spanish Civil War before, it never really struck me until now. I was quite literally taken aback by it all. The whole story was written in such a way that it taught me more about history than an actual history lesson but that’s just the way I learn.

I would say that the most enjoyable part of the story itself is the beginning up to when the Spanish Civil War starts and then when the Civil War finished to the end of the actual book. It’s not like I didn’t like the tale of the Civil War because it is important to learn about a historical event, but I feel like it’s not suitable to say that I enjoyed such a story, as so many people suffered and died.

In terms of the way the book was written, it intrigued me into carrying on to find out the whole story of the Spanish Civil War. It used dance as a positive anchor in people’s lives through the time of the Spanish Civil War, which made me happy as a reader. This was because, even though they were going through tough times they still held onto what they loved, and this is something I believe we could all learn from.